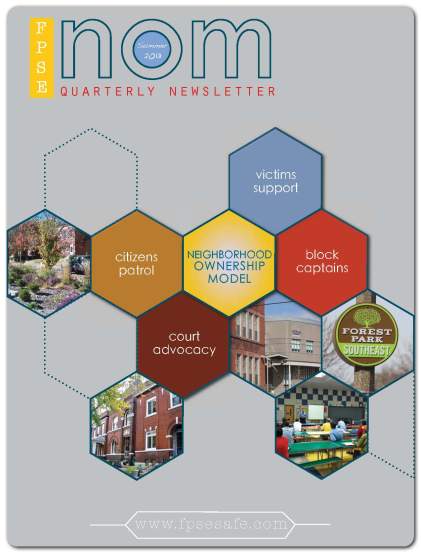 The Neighborhood Ownership Model (NOM) began taking shape last August, when residents of Forest Park Southeast became part of the solution on the road to a safer neighborhood.  FPSE residents began working with police officers, prosecutors, and judges to reduce crime throughout the area.  In the past year the NOM has began working with a full-time  dedicated  court advocate for the neighborhood, as well as an St. Louis Metropolitan Police Department NOM Officer.  Isabella Lovadina was hired to be the FPSE Court Advocate, and has experience as a SLMPD Officer. On June 1st 2013, the NOM introduced the new NOM Officer, Paul Henkhaus. Henkhaus has brought an extensive amount of experience in FPSE to his new role as well. These are just two examples of what the Neighborhood Ownership Model has done in its short one year history.

Now, the first quarterly NOM Newsletter has arrived to show the progress of the program and to get information about meetings, involvement, and initiatives  to the area residents. You can download a digital copy here: NOM Summer 2013 Newsletter